We are a dynamic, performance music school based in Southern Tasmania. We teach drumming, musicianship piano and performance skills.

Our curriculum encourages students to challenge their abilities and go beyond individual musical boundaries.

Training sessions are provided in a manner geared toward the practical understanding of rhythm movement and musicianship.

Our classes provide the opportunity for students to join one of the performance drumcorps.

Phillip Campbell is a Member of the Music Teachers Association of NSW and began lessons at age 8. He studied drums at Billy Hyde drum clinic in Melbourne and attended master classes as a teenager. Fuelling his passion, he then went on to study musicianship and piano privately with Bette Motzing and Julie Spithall of the Sydney Conservatorium of Music. Phillip continues to expand his knowledge of drumming and music.

Phillip founded the Waratah Drum Corps in 2009, the student group built a solid reputation for theatrical and exciting performances and opened Sydney Festival two years running, They have performed for Australian Museum and numerous festivals and events. In 2019 the group led the Lord Mayor of Sydney as a part of Sydney's Christmas in the city celebrations to light the Martin Place Christmas tree. 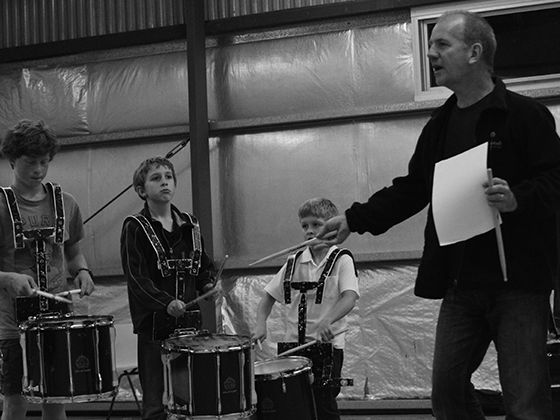